Connect and share knowledge within a single location that is structured and easy to search.

Fex. I asked a question about self as verb, and one of the answers was really not an answer.

Self as noun or action/verb?

I don't like to get into quarrels with or offend other users, so I'd like to know what happens if I flag answers.

In the Help Center there are guidelines for how to write a good answer. These can be taken into account when evaluating the quality of an answer.

If one decides to flag an answer, there are several possibilities. Take a look at the picture below. This is the menu one will see when pressing the flag button. When a post has been flagged then the site-moderators handle it from there. A moderator have several options, some of them are to edit the post, delete it, leave a comment to the author.

Flagging is anonymous for other users, only moderators can see who have flagged a post.

Hope this helps. Feel free to ask again, if you need more info. 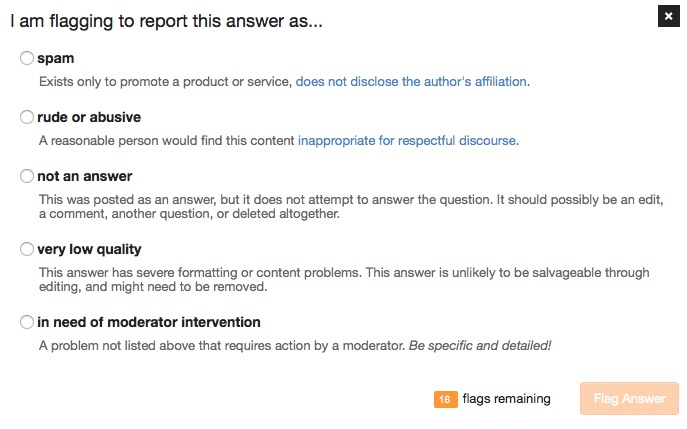 If you are up to mentally dispraise something, you should consider this (Avannaraha Sutta: Dispraise).

If you are up to verbally dispraise something (and 'flagging' is probably generally assumed as such), you should consider "this (sutta about Dispraise)" too.

If a moderator is up to bodily destroy something, thinking "that has been dispraised, that is not good for our credits", he too should consider "this (about Dispraise)".

If the moderator was following your hint blindly, that your action has been fulfilled as well and you should confess it and try to remove an eventual "pitfall" or to reconstruct the bridge over a "pitfall" for others.

As for the moderator himself (or herself), it's actually the same: whether he/she did it for this or that purpose, "this (sutta about Dispraise)" still fits.

Regard the answer you quoted, this is actually a perfect answer, since "Self" is actually a deed (often called I-making by the Buddha), a deed by thought that make it to a "Subject or Object" (concept of reality) - as it is with the other samples as well - what someone could have found (or has been able to find) out for him or her self with this perfect bridge out of a thicket of wrong views. But if somebody simply stays on the level of certain conventions, does not loosen ones grasps before, then such an explaining (like I did here for your sample) might be accepted broadly but stay for another time just an conventional view and has less change to encourage one self what this circle of sequence in making things to something lasting, a noun, is all about and so does one fail to understand and being released.

As it is in the midst of Dhamma and not just a "we"-arguing, Atma suggests to move it into the "beta" area.

(Note: this answer has not been given with the agreement to be means of trade or the purpose of/for trade and/or keep people trapped and bound. How you handle it lies in your sphere, but does not excuse the deed here either.) Credits in regard of grammer and spelling goes to Upasaka Chris and the moderator team. Sadhu!

I hope most other users here are that way too.

A related topic is Posting comments to answers.

In summary, it depends on whether people (including you) perceive it as a useful answer.

If you downvote an answer, people will see that someone downvoted it but they won't know who (won't know it was you).

A curious person can look at your total "Votes Cast" on your user profile (and see how many times you've up- and down-voted in total), but people can't associate individual votes with specific topics.

If you flag an answer then moderators will know you flagged it, but that's confidential (i.e. moderators won't tell other users about any flags you raise).

In any case (whether or not anyone flags), moderators may or may not choose to delete an answer (depending on whether they think it's an answer). Moderators opinions' are inluenced by other users (if an answer gets several downvotes or flags then I for one am more likely to delete that answer).

I'm inclined to delete, not 'bad' answers, but rather answers which don't answer/address the question.

Furthermore "trusted" (i.e. high-reputation) users can vote to delete an answer that has been downvoted.

An alternative is to downvote (a downvote means "This answer is not useful") instead of flag (and flag when it's truly not an answer, e.g. if it's a reply addressing some other answer, which should have been posted as a comment, or something like that).

Not the answer you're looking for? Browse other questions tagged discussion specific-answer flagging .

Welcome!
This site is for discussion about Buddhism Stack Exchange. You must have an account there to participate.
Help
Visit chat

6
Should we have a policy not to provide koan answers?
4
Should this 'zen type' answer be deleted?
4
Moderating answers which don't answer the question?
4
Are the kinds of question, and what kinds of answers are good, considered on Buddhism.SE?
1
Posting comments to answers

17
Answers vs Advice
3
May people criticize other schools of Buddhism?
4
Are questions with lots of parts on topic?
1
Why can we see deleted answers?
4
Moderating answers which don't answer the question?
2
Assuming that discussions are not from interest - practical and Buddhas response [meta]
2
What about self-answering questions?
4
Proposal: Self-answering questions is welcome
2
On questioning motivations for asking
2
A request to reopen a question